My younger sister works at Hobby Lobby, so my kids usually get some sort of crafty gift from her. Christmas was no exception. She bought some cute black velvet (I know, how can black velvet possibly be cute, right? Just wait and see...) iron-ons for them. Robots for Mr. B and a butterfly and dragonfly for Miss A. She was also kind enough to supply the t-shirts and fabric markers for them, but the fabric markers got left in Reno with my youngest sister when we visited for New Year's. So, I procrastinated and then procrastinated some more, all the while having a 3 and 5 year old nag me, and finally went to Micheal's and bought some fabric markers. Luckily Jo-Ann had a 50% off coupon in the paper, so I was able to get them cheap. Now, I thought buying fabric markers would be simple, but it wasn't. Do you know how many options there are? Well, do you? Too many, that's how many! You can buy individual markers for about $3.50, a set of six for about $10, or a set of 20 (I think) for $50 (I think, really, it was too much money and too many markers for me to justify). Well, we finally picked out the bold markers, even though the set had green, lime green, and yellow, but no orange. Really?! Lime green, green, and yellow? Don't they know that green and yellow make lime green? Maybe, but they also must know that red and yellow make orange, and that's why they didn't have orange in the set. Must be.

But, I digress. We bought the markers (50% off!) then headed home, after looking at all the animals in the pet store because they were good at the craft store. Then, over the course of the next several days I colored their shirts. Miss A was allowed to do some of her own coloring, while I did touch-ups. However, Mr. B is not allowed near markers, and I wasn't about to let him loose on a shirt that I wanted to look good, so he told me where to put each color. Now, even though Miss A wanted to make sky above her dragonfly and butterfly (which would have looked very tacky), and stray blue marks in the middle of her shirt, they turned out pretty good. I did have to do some mods on Miss A's shirt that I wasn't planning to make, but what I wanted to do was make the flight paths of her two insects, but that didn't happen.

The iron-ons were pretty easy to do. Just follow the directions. The only thing I was worried about was all the extra black velvet around the image, but, since there wasn't any adhesive on that part, there was nothing to worry about. 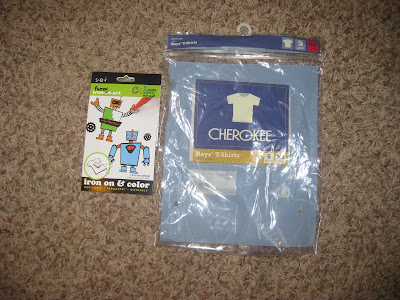 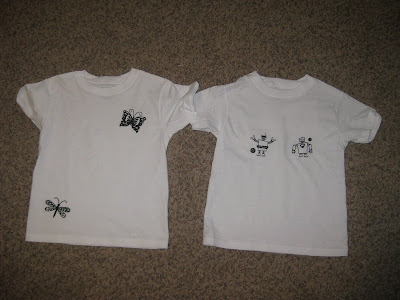 My only gripes: The images were small (the packages are the same size as a 3x5 index card, then I cut each card in half to separate the two images on the shirts), so that made the markers hard to use. However, in the images' defense, the markers were the bold tip. I have a feeling a different tip would have been better. I would like to try a brush tip some day, and a set of fine tips would be very handy too. However, the bold ended up being a blessing for all the extra work I had to do on Miss A's shirt to cover-up all her 'creative-ness'. 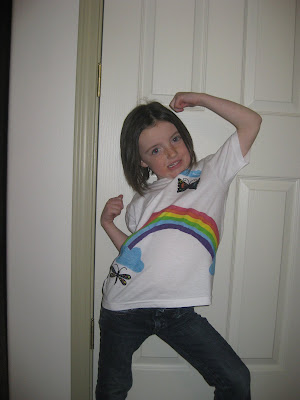 That rainbow and the clouds, yeah, those were the things I wasn't planning to do, until Miss A got all creative on me. :) But she loves the rainbow, and I love the way the clouds wrap around the sides, so there's a little something extra on the back. However, that rainbow took a few hours of back-breaking work on the living room floor to color. Two coats for each color. 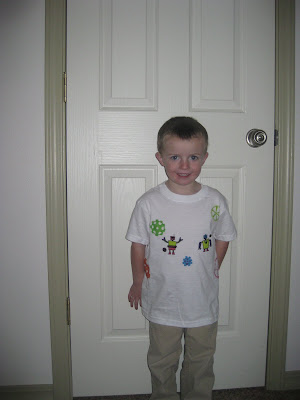 My favorite part of Mr. B's shirt? The big gears that I free-handed with ideas from a Google search for gears, so they wouldn't all look the same. The blue one in between the robots, I don't like that one. That was my first attempt. But the other ones make up for it. At least I think so.
Posted by Leslie@leserleeslovesandhobbies at 4:49 PM

Email ThisBlogThis!Share to TwitterShare to FacebookShare to Pinterest
Labels: clothes, Miss A, Mr. B

Mr. B is in Sunbeams. And he looked adorable in his shirt. Miss A does too. Good job to all!

I say let Mr. B and Miss A be creative. They are young so it is ok to make mistakes and they will learn and grow from it.

Leslie@leserleeslovesandhobbies
Leslie is a part-time "instructional assistant" at a local Montessori school and full-time mom. She struggles with cleaning the house and exercising. She's been married to the same man since 2005 and has two kids. Miss A is 5, and Mr. B is 3.